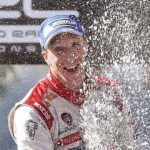 Kris Meeke is today savouring his first win on the World Rally Championship.

Kris spends a lot time in Donegal and has strong connections with motorsport in the county.

Letterkenny’s Rory Kennedy has competed on 26 WRC events and has known Kris for a very long time.