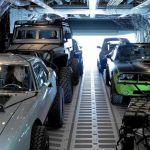 Fast & Furious 7 has overtaken Frozen to become the fifth highest grossing film of all time.

The action thriller has now taken around $1.32 billion worldwide. The latest in the Furious franchise spent its fourth weekend at the top of the US box office, and continues to draw in audiences around the world.

This isn’t the last we’ve seen of the immensely popular franchise. Vin Diesel recently announced that Furious 8 will be released in April, 2017. Making the announcement, he said, “I swear to you and to my brother upstairs [Walker], we are going to make the best movie you’ve ever seen.”

In Short: Fast and Furious 7 has overtaken Frozen to become the fifth highest grossing film of all time. It has now taken $1.32 billion worldwide.