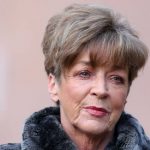 Coronation Street legend Anne Kirkbride is up for a British Soap Award nearly four months after her death.

The 60-year-old actress, who became a household favourite as Deidre Barlow, died in January. She had starred in the ITV soap for 44 years but had been away from the screen since last September following her diagnosis with cancer.

Kirkbride is nominated in the scene of the year category for the episode in which Deirdre threw a trifle – which were to be among her final scenes in Weatherfield.

The emotional episode saw Deirdre hurl her trifle at a wall in anger before breaking down in the arms of husband Ken, and the scenes were filmed to allow Kirkbride to take an anticipated three-month break from the show.

They show Deirdre reaching breaking point after daughter-in-law Carla and daughter Tracy argue over Carla’s reluctance to speak to her imprisoned husband Peter on the phone.

Ken suggested that Deirdre stayed with her friend Bev for a while, and that was the last time Deirdre graced the cobbles.

Other scenes nominated for the award are the strictly dancing episode in Doctors, Kathy comes home in EastEnders, Donna’s goodbye in Emmerdale and the train crash in Hollyoaks.

The 17th annual awards take place in Manchester on May 16.

The ceremony will look back on the murder, mystery, make-ups, break-ups, trials, tribulations and tears which have filled soapland over the past 12 months.