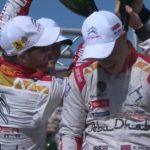 Kris Meeke and Paul Nagle have won their first ever round of the World Rally Championship.

The Tyrone Kerry partnership brought their Citrron DS3 home 18 .1 seconds ahead of the field to win Rally Argentina.

The crew started today’s final leg with a lead of more than half a minute, However, despite a short final schedule of just over 20 miles, the Dungannon driver knew he could take nothing for granted – particularly since the final stages would be a pair of runs over El Condor, one of the most notoriously tricky roads in the entire WRC.

Kris and Paul stood on the DS’s roof at the finish line in celebration, then an emotional Kris fought back tears as he paid tribute to his early mentor, the 1995 World champion Colin McRae. ‘What can I say? It’s been an exceptionally long road. This one’s for Colin.’