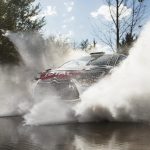 Co Tyrone's Kris Meeke leads after day 2 of the latest round of the World Rally Championship - Rally Argentina.

Jarri Matti Latvala is third in his Volkswagen 1min 23.5sec down on the Dungannin man.

The Citreon crew have been performing brilliantly, both fast and consistent while managing to steer clear of damage and reliability issues.

World Championship leader Sébastien Ogier will be under rally2 rules on Saturday after parking his Polo R on the first stage of the day with engine problems.

December 1, 2021
Fine Gael TD Joe McHugh is backing calls for the scrapping of the sliding scale saying it doesn't make sense. On today's Nine til Noon...