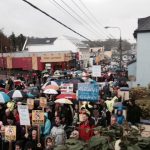 A large turnout is expected in Letterkenny today for a protest against Irish Water.

The 'bin the bills' demostration gets underway at 2 o clock. The protest is organised by Cant Pay Wont Pay.

In the past it has been suggested that there are two much tensions and splits amongst the water charges campaign in Co Donegal.

But Right to Water spokesperson, Phillip McFadden is calling for unity: