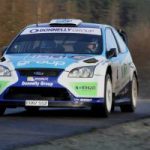 With work continuing in the park in Derry, rallying was based on the single stage at Burt in Donegal.

Kelly and Foley beat the bogie time on all three runs but on the time sheets they finished three seconds ahead of the Subaru of Frank Wray and Joe Mc Nulty.

The Mini of Derek Mc Geehan and Arthur Kierans was third a further five seconds back.

Joesph's Mc Gonigle's Skoda was fourth and the Fiesta of Pauric Duffy rounded of the top five.