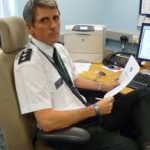 A PSNI Area Commander in Derry says whoever left three viable devices in Drumahoe will be found and brought before the courts.

The pipe-bomb devices were found by a member of the public on a riverbank close to a pub car park at around 10.30am.

Police have said the devices were designed to kill or maim.

On today's Shaun Doherty Show, Chief Inspector Tony Callaghan confirmed that the devices are similar to ones found on the Waterside in February, but stressed police are not jumping to conclusions.........