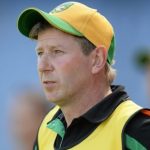 The Donegal senior hurlers will play in Division 2B of the Allianz National Hurling League again next season.

They defeated Tyrone 2-16 to 2-12 in a thrilling relegation/promotion play-off in Celtic Park.

After a long hard season, it was a great result for Ray Durack's side, and afterwards he expressed his delight with the outcome.