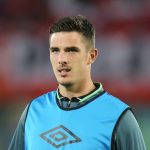 The Republic of Ireland International who has strong Donegal connections is definitely out of this weekend’s FA Cup semi final after damaging his medial ligament against Spurs.

There are fears around Villa Park that he will not play this campaign and if that is the case he could be a doubt for Ireland’s next qualifier against Scotland in June.

Meanwhile Clarke’s Republic of Ireland team-mate Shay Given will start for Villa in the cup semi final on Sunday against Liverpool.

The Lifford man has played all previous rounds in the competition against Blackpool, Bournemouth, Leicester and West Brom and manager Tim Sherwood has been impressed with his stopping displays in those clashes.

"He's a large part of the reason we're in this semi-final. "Some of the saves he made against Leicester were fantastic - and at the right time. He trains fantastically well and he's pushing Brad all the way for that No.1 spot."