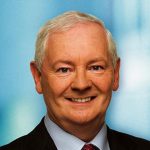 Fine Gael Deputy Dinny Mc Ginley is stressing that there is no question of PPS numbers being handed to Irish Water.

Can't Pay Won't Pay have accused the government of deception after it emerged that persons applying for the Water Conservation Grant will have to state their PPS numbers. Particular concern has been expressed at the fact that telephone applications will be handled by a private company.

Deputy Mc Ginley says the conservation grant, which involves a €100 rebate on water bills is being handled by the Department of Social Protection, on whose behalf the private company will be working.

He says there are good reasons why PPS numbers are being sought........