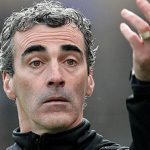 Donegal’s All Ireland wining manager Jim Mc Guinness has been working with the Saracens rugby team ahead of their European Champions Cup Semi Final.

With Clermont Auvergne to come on Saturday, McGuinness who is currently a sport psychologist at Celtic gave a motivational talked to the English Premiership side.

The Glenties man became the latest in a long line of sporting figures to address Saracens’ first-team, which in the past included the likes of American athlete Michael Johnson, former motor racing world champion Jackie Stewart and ex-England cricket captain Andrew Strauss,

Saracens director of Rugby said “We bring speakers in on a regular basis,”

“Jim McGuinness was the Donegal football manager for four seasons. He’s currently the sports psychologist at Celtic and he was Paul McGinley’s right-hand man at the Ryder Cup in 2014”.

“He took Donegal on a journey over four years and it seemed like a very similar journey to our own”.

“He captivated the group for an hour. He is an extremely passionate speaker and he was fantastic for the players, who really enjoyed it”.

“I am not from Donegal, but I studied the story from afar and admired what he did. He had a very interesting story.”