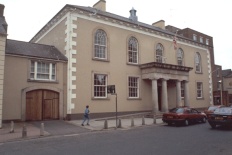 An 18-year-old Strabane man accused of trying to rape a girl aged 15 while on police bail for allegedly raping a 19-year-old woman has been remanded into custody.

Ross Donahoe, of Altiskane, Strabane, was charged at Enniskillen Magistrates Court with raping the woman on March 22, and attempting to rape the girl two weeks later.

Objecting to bail, a police officer said the older girl had identified Donahoe as the man who raped her twice in the grounds of Strabane Health Centre. Donahoe was arrested, but claimed the sexual contact had been consensual. He was released on bail.

The officer said last Tuesday, the younger girl claimed Donahoe had tried to rape her on Easter Monday.

She claimed she had been kissing him when he tried to pull down her trousers.

District Judge Nigel Broderick said that because of the risk Donahoe would commit further offences or interfere with witnesses, he was remanding him in custody to appear at Strabane Court by video link on May 7.