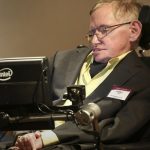 Music fans may feel as if they have entered an alternate universe when they hear one of the world’s greatest scientists cover a Monty Python classic.

Professor Stephen Hawking can be heard singing the show’s famous Galaxy Song, released digitally this week, and available on vinyl this weekend as part of Record Store Day 2015.

The A Brief History Of Time author can be seen in the music video whizzing through space in his wheelchair, while the footage is interspersed with scenes of the Monty Python live shows.

One of the cult comedy act’s members Eric Idle tweeted to let people know the record is available.