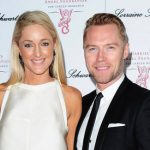 Ronan Keating has got engaged to his "best friend".

The Boyzone star popped the question to his TV executive girlfriend of three years Storm Uechtritz twice, once while on a romantic holiday in Thailand and a second time in front of his three children upon their return to Ireland.

He shared: "I proposed twice and she said yes both times, thank God. We've been together a few years now and knew we wanted to spend the rest of our lives together. I felt it was the right time."

The 38-year-old singer's engagement comes just one month after his divorce was finalised following his split from his wife of 14-years Yvonne - with whom he has children Jack, 16, Missy, 14, and nine-year-old Ali - in 2011 after it was revealed he'd had a seven-month affair with a Boyzone tour dancer.

He told HELLO! magazine: "Storm isn't just marrying me, there are four of us involved. Storm has an amazing relationship with the kids, which is very important."

Ronan previously admitted his new fiancée - who he met on the Australian version of 'The X Factor' - helped him to come to terms with the death of his bandmate Stephen Gately.

He said: "Storm understood me and was there and it was everything to me. We became real good friends, and the chemistry got greater and greater and over time one thing led to another.

"I've never known anything like it - she's my best friend."