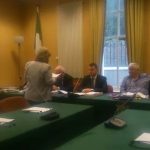 The group were protesting at the handing over of County Council housing tenants details to Irish Water, despite a motion from councillors urging him not to do so.

One member of the group, Margo Mc Grory, handed a letter of objection to the Chief Executive of the Council Seamus Neely stating the groups opposition and anger at these details being given to the new water utility.

The letter handed to the Chief Executive reads:

It is a great disappointment to learn that, although voted against by the majority of Councillors, Donegal County Council tenants details have been passed to Irish Water by yourself.

Residents in Donegal were not asked for their authorisation to have such details imparted but rather received a letter informing them of the decision taken on their behalf.

Much outrage and anger has been expressed by the Council tenants who feel this is a viotaion of their privacy in order to facilitate the setting up of another Government quango.

It has been noted taht when a tenant moves into a new Council house the Council is under no obligation to pass their details on to ESB/Bord Gais etc.

Why in this instance would residents details automatically be passed on to Irish Water?

Residents would like to know why you overruled the Councillors decision as they feel totally batrayed as a consequence.

We look forward to hearing your response.