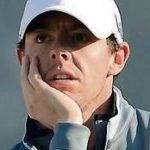 Four strokes ahead going into the final round at Augusta National, the 21-year-old Texan closed with a two-under-par 70 to match the tournament record low of 18-under 270 for 72 holes.

Spieth equalled the previous best set by Tiger Woods when he clinched his maiden major title at the 1997 Masters.

Justin Rose signed off with a 70 to share second place with three-times winner Phil Mickelson, who carded a 69.

Rory McIlroy was best of the Irish contingent and finished fourth on 12 under par after shooting the lowest round of the day, a 67.

Darren Clarke finished seven over while Graeme McDowell was nine over.