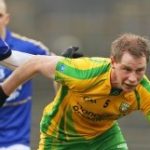 Donegal Manager Rory Gallagher has made two changes to his starting line up for Sunday's National Football League Semi Final with Cork.

Michael Murphy comes back into the full forward line having served his suspension replacing Hugh Mc Fadden and Anthony Thompson gets his first start of the year in the half back as Eamonn Doherty gives way.

Martin Mc Elhinney and Christy Toye will stay as the midfield partnership but Neil Gallagher is named among the bench after missing the trip to Mayo last weekend.

The Donegal team to play Cork on Sunday

Donegal v Cork will be LIVE from Croke Park on Highland Sunday Sport from 1.45pm with Oisin Kelly & Declan Bonner in association with Brian Mc Cormick’s Sports and Leisure.