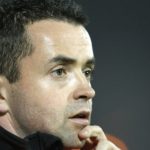 Maxi Curran's Donegal reached the final by beating Monaghan and four in a row winners Cavan while Tyrone disposed of Armagh and Fermanagh on route to this evening's decider.

Donegal who last tasted success at this level in 2010 are hoping it's third time lucky having lost the last two finals to Cavan.

Tyrone who are under the management of Fergal Logan, Peter Canavan and Brian Dooher this year, haven't won the Under21 title since 2006.

Maxi Curran is hoping Donegal will put those final defeats to rest tonight....