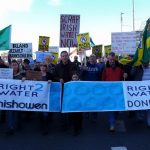 Right2Water Donegal is to hold a protest outside County House in Lifford on Monday morning next.

The protest at 9.30 will take place before Donegal County Council reconvenes to complete its March meeting.

The group says it is inviting people to hand back, bin or dispose of Water bills outside the seat of local government.

Right2Water spokesperson Owen Curran says they will also hand in a letter asking why the County Manager handed over the details of Council tenants to Irish Water, despite a direction from Councillors not to do so.

He's also asking what councillors are doing about the Irish Water situation now, saying this raises questions about local democracy...........