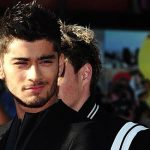 Zayn Malik has been banned from touring with Little Mix.

The 22-year-old hunk recently quit One Direction and returned home to be with his fiancée, Little Mix's Perrie Edwards, but bosses are worried he may use his newly-found free time to follow her around while on tour, which could distract attention away from the group and cause tension within the band.

An LA source close to the 'Move' singers revealed: "The law has been laid down to Zayn - you cannot follow Perrie around like a puppy dog.

"Senior figures are worried that with Zayn being so lost and confused after his One Direction split, he will just want to hang out with Perrie to make him happy."

Chiefs at Syco and Columbia Records are reportedly fine with the couple dating, and support their decision to wed, although they are keen for Perrie to focus on the band - which also features Jesy

Nelson, Jade Thirlwall and Leigh-Anne Pinnock - as they gear up to release their third studio album.

The source continued: "One aspect is that he is desperate to show her that their relationship and real and things are back on track despite accusations he cheated on her while in Thailand.

"For Little Mix the next year is vital in terms of their progression. They will tour a new record and promote themselves. They have achieved a strong base following, but they need to convert that into becoming better known.

"Having distractions is not what they need. Perrie already faces dozens of media questions about Zayn, when the focus should be on their music."