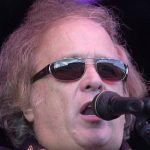 The wistful anthem that asks “Do you recall what was revealed the day the music died?” is going on the auction block today.

Christie’s in New York says McLean is selling 16 pages that include the original working manuscript and typed drafts of the song.

“The day the music died” refers to the February 3 1959 deaths of Buddy Holly, Ritchie Valens and the Big Bopper in a plane crash.

McLean, 69, who lives in Maine, says writing the song was “a mystical trip into his past”.