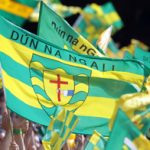 Donegal advance to the Semi Final of the National League Division next Sunday against Cork after a hard fought draw with Mayo in McHale Park, Castlebar.

A Patrick McBrearty goal had Donegal leading by a point at half time and in an exciting 2nd half Donegal forced the draw with  late Stephen Griffin point.

After the game Oisin Kelly spoke with Odhran McNiallais.....