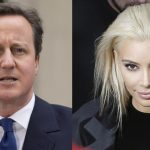 What does the Eton-educated British leader have in common with reality TV star Kim K, who became famous when her sex tape was mysteriously released for public viewing… apart from their obvious love of posing for selfies?

Apparently they share a common ancestor which makes them relatives.

n an interview with Heat World, Prime Minister David Cameron said he is definitely related to the Kardashian Klan.

And a little bit of digging revealed that Sir William Spencer, who was born back in 1555 in Oxfordshire, was the shared ancestor.

So does this mean Dave Cam is on a mission to break the internet? Or the electorate?

Or does he just want to get on the Kardashian “Kristmas card” and change his last name to “Kameron”?