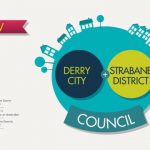 A radical change in local politics has taken place in the North, with the 11 new 'supercouncils' now in place.

As of midnight, Derry City Council and Strabane District Council ceased to exist, with their functions now transferred to the new Derry and Strabane Council.

The council has been operating on a shadow basis since last year, and has now assumed political responsibility for the region under new Mayor Elisha Mc Callion.

Functions sych as refuse collection and off street car parking are now under the control of the new authority, with officials saying residents will notice relatively little change, although the charging structure for commercial waste services has changed, with households sent notification of that in recent weeks.

In the area of parking, all forms of payment, including the current ability to pay via phone or through the Parkmobile app, will continue to operate as normal.

However a DRD pilot scheme of £1 for 5 hours car parking ended last night, and parking charges have now reverted to whatever hourly costs were in place before the pilot scheme.