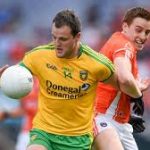 Donegal had a convincing 10 point victory over neighbour's Tyrone in the Division 1 National Football League match at McCumhaill Park.

The victory has all but secured  Donegal's place in Division 1 next season.

Donegal led by 1-9 to 3 points at half time with Ryan McHugh scoring the goal after a good Donegal move and Michal Murphy hit five points.

The 2nd half which was more of a low scoring affair seen Murphy get a black card.

The Donegal Captain spoke to Highland Radio's Oisin Kelly directly after the match .....