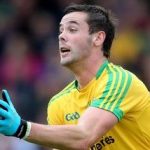 Paddy McGrath and Neil Gallagher - who were slight doubts ahead of this weekend - are also named in the starting 15.