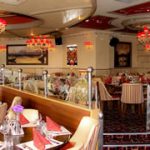 The owner of a Derry restaurant gutted by fire earlier this month says he's hopeful of getting his business up and running again.

Almost 70 staff at the Mandarin Palace are now out of work after the inside of the building was gutted last month.

The start of the fire was captured on the restaurant's CCTV camera, as staff attempted to extinguish the kitchen blaze.

Speaking on today's Shaun Doherty Show, owner of the Mandarin Palace, Stan Lee said part of the building will have to be demolished.....