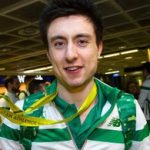 The Irish Sports Council has announced the breakdown of it's International Carding Scheme for this year with a total of 1.57 million euro being allocated to 75 athletes across 14 different sports.

Four of Ireland's top boxers have been given podium-level funding of 40-thousand euro per year, with Olympic medalists Katie Taylor, Michael Conlan and Paddy Barnes joined by Joe Ward.

Among the other 16 podium-level athletes are Derry's Para-Olympic Champion Jason Smyth and triathlete Aileen Reid.

Two time European medalist Mark English from Letterkenny comes in at world-class- level receiving €20,000 while Donegal Olympian Brendan Boyce and Raphoe Badminton stars Chloe and Sam Magee will get the international level €12,000 each.