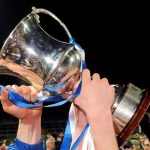 The Ulster Council have confirmed the venues for the Ulster U21 Championship semi finals next Wednesday 1st April.

Donegal will play Monaghan at Healy Park in Omagh while Tyrone make the trip to Brewster Park Enniskillen to take on Armagh.

Both games start at 8 O'Clock.

For the first time since 2010 there will be a new name on the Iris News Cup after Donegal beat the five in a rown chasing Cavan in the quarter finals.