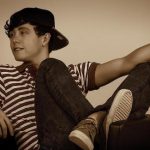 The singer-songwriter – whose real name was Christopher James Hardman - shot to fame at the age of 15 after appearing on the Channel 4 series 'Rock School', and went on to sign an album deal with RCA, reaching number three in the UK singles chart with his debut single 'Checkin' It Out'.

No details about the cause of the star's death have yet been revealed, but family and friends have posted tributes online, with his close friend Lloyd Wilkinson - who he once recorded a single with – paying his respects on Facebook.

He wrote: "I can not believe I'm doing this and I'm completely devastated.

The news of his death comes less than four months after he revealed he was planning a comeback to music, having not released an album since 2008's 'What's It All About'.

In December he wrote on Twitter: "I'm planning to come back again! Hopefully this time for a little longer! Keep sticking around for updates."