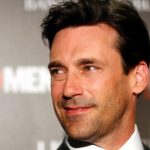 Mad Men star Jon Hamm has been treated for alcohol addiction, it has emerged.

The 43-year-old actor, who has completed the treatment, had the support of his long-time partner, actress and film-maker Jennifer Westfeldt, in his struggle, his publicist Annett Wolf said.

The couple had asked for privacy and sensitivity, a statement said, and no further details were provided.

The disclosure, first reported by TMZ, came as the final season of the 1960s TV drama begins on April 5 on AMC.

Hamm plays Don Draper, a troubled advertising executive with a dark past. The role brought him stardom and repeated Emmy Award nominations.