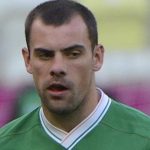 Darron Gibson has been forced to withdraw from the Ireland squad for Sunday's Euro 2016 qualifier against Poland at the Aviva.

The FAI has confirmed that the Everton midfielder will be allowed to return to his club for treatment on a persistent groin injury.

Gibson and Steven Ward didn't train again this morning, but Ward remains part of the squad at this point as he continues to monitor an ankle injury.

James McLean also sat-out training today after limping-out of yesterday's work-out with an ankle injury, but Ireland assistant manager Roy Keane says that the Wigan midfielder should be available this weekend.