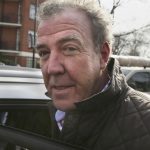 Jeremy Clarkson has launched an expletive laden broadside against BBC executives who he claimed are about to sack him.

The Top Gear host has been suspended since it emerged he was involved in what the corporation called “a fracas” with one of the show’s producers, Oisin Tymon.

The 54-year-old revealed he wanted to do “one last ever lap” of the Top Gear test track as he was talking on stage at a charity gala for young people at the Roundhouse in north London.

In video footage obtained by the Daily Mirror, Clarkson said: “I thought, OK I’ll go down to Surrey and I’ll do one last lap of that track before the f***ing b******s sack me, and then I thought ‘well why don’t we put somebody in the car with me?’.”

He went on: “I’ll drive somebody around in whatever I can get hold of when I’m sacked, so it will probably be an Austin Maestro, who knows?

“But anyway, we’ll do one last ever lap of the Top Gear test track.”
Clarkson admitted: “I’ll be a bit tearful when I do it.”

He added: “To be in the audience of Top Gear there was an 18-year waiting list. You know the BBC has f***ed themselves, and so who gives a f***?
Clarkson’s future on the BBC is likely to be decided next week when the corporation’s internal investigation into his behaviour is handed over to the director-general.

A BBC spokesman said yesterday: “Following last week’s suspension of Jeremy Clarkson, Ken MacQuarrie is now considering the evidence and will report to the director-general on his findings next week.

“Once this has been considered, we will set out any further steps. The BBC will not be offering further commentary until then.”

“It was a great show and they f***ed it up.”
Clarkson was suspended after allegedly punching producer Tymon during a row – which took place after filming – over a hot meal at a hotel.

The last episodes of the series have been postponed, causing the BBC to lose millions of viewers and receive thousands of complaints.

Both Clarkson and Tymon have now given their evidence to the corporation’s inquiry.