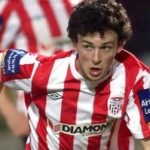 Derry City will be on the road again this weekend as they travel to northwest rivals Sligo Rovers on Saturday evening.

The Candystripes will be looking to get themselves back on track after last weekend’s home defeat to Champions Dundalk.

Peter Hutton knows just how tough it will be to get three points in The Showgrounds, the last time Derry claimed all three points at the Sligo venue was in August 2009.

The good news for Derry this time around is that they will see a return to the squad of injured players, Cillian Morrison , Nathan Boyle and Anthony Elding while Seanan Clucas has finally received international clearance and will also be available for selection.

Derry have doubts over trio Gerard Doherty (hip), Shaun Kelly (knee) and Barry McNamee as they are all carrying knocks ahead of this weekend’s game.

Speaking ahead of the game, Derry Manager Peter Hutton had this to say. "It's great from my point of view to see the likes of Cillian Morrison, Nathan Boyle and Anthony Elding all available for selection this weekend and also to get Seanan's clearance finally sorted is good news for us. This is a game that we always look forward to as both teams like to play attractive football which always leads to an entertaining game. We have no doubt that Sligo will come at us from the start which should allow us to play a little. I have watched them already this season and Owen Heary has put together a very good squad of players who can hurt you in different areas of the pitch. We expect them to be very dangerous from set pieces with the likes of Gavin Peers and Stephen Folan imposing themselves. So we will have to be very mindful and give them the respect they're due but having said that we must learn from the Dundalk game last week and not give them too much respect and take the game to them."