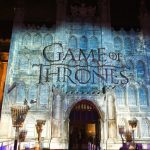 Seven newcomers will be joining the cast of Game Of Thrones for the fifth series.

They include Jonathan Pryce as High Sparrow, Toby Sebastian as Trystane Martell and Jessica Henwick as Nymeria Sand.

Here’s what they had to say about the show, ahead of the new season’s debut on Sky Atlantic on April 13.

Described as a “devout and pious man”, High Sparrow came to King’s Landing to serve those forgotten by much of the world – the poor, the downtrodden and the sick – and amassed a large following. His fellow believers have swarmed over the city, ministering to the lowest and decrying the corruption of the highest.

“I was attracted to it because of the script and the character – it’s a new character that doesn’t relate directly to any other character,” he said.

Jonathan, who recently appeared as Cardinal Wolsey in BBC drama Wolf Hall, admitted he didn’t say yes immediately. “I don’t watch much TV and I naturally shy away from sword and sorcery things but once I became involved and I started watching the other series, I was really impressed. It’s very exciting.”

:: Hannah Waddingham – Septa Unella
Theatre actress Hannah said it was “amazing” to join the show although she is concerned about her screen presence. “I’m excited to see how utterly hideous I look because it’s not an attractive part,” she said.

“She’s one of the Septas. I have a habit and a wimple and I have no make-up on, which is not a good look for a woman close-up on camera. But it was great because it made you find a different part of your personality and she’s really a piece of work. She’s not nice.

She added: “I was so kindly received by everybody and the directors could not be more interested in bringing a new element to the programme. Working with Jonathan Pryce, we had a fabulous laugh.”

:: Kerry Ingram – Shireen Baratheon
Shireen is the daughter and only child of Lord Stannis Baratheon and Lady Selyse Florent.

“Expect awesome scenes. I haven’t read the books but from what I’ve heard, it differs from the books,” said the 15-year-old actress, whose previous stage work include roles in Matilda The Musical and Oliver!, with parts in Tom Hooper’s Les Miserable and BBC drama Wolf Hall.

:: Jessica Henwick – Nymeria Sand
Jessica said the moment she found out about getting the part was “surreal”.

Recalling it, she said she was at home with her mum, adding: “I think I screamed and then I just went really calm.”

Jessica, who is a big fan of the show, said she asked to fly out the next morning for training.

“It was too fast for me to really let it sink in. I kind of don’t think it has yet,” she said.

:: Toby Sebastian – Trystane Martell
Trystane is Prince Doran’s son and heir to Dome. His father betrothed him to Mycella Baratheon as part of the alliance offered by Tywin Lannister, then Hand of the King.

“My character gives a glimpse of what we are about to see with Dawn. We haven’t seen this place yet and this is really exciting and terrifying.”

:: Nell Tiger Free – Myrcella Baratheon
The 15-year-old actress, who has appeared in Broken and the film version of Mr Stink, has replaced Aimee Richardson in the role of Myrcella – officially the eldest child of Cersei Lannister and the late King Baratheon. In truth, her biological father is her uncle and Cersei’s brother Jaime.

For years she has been a guest and ward of Prince Doran but her position has become tenuous with the death of Oberyn Martell, the Prince’s brother.

:: Rosabell Laurenti-Sellers – Tyene Sand
Tyene is the daughter of the late Prince Oberyn Martell by Ellaria Sand, his final romance. Tyene is fiercer than she looks, especially with her twin daggers.

April 16, 2021
Gardai have reiterated their appeal to motorists to slow down after a driver was detected travelling at almost 150mph in Inishowen this week. The case...