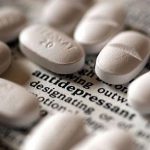 Up to 500 thousand people take anxiety pills in Ireland.

The Irish Examiner says almost 2.3 million prescriptions were written for anxiety and depression drugs in 2012.

330 thousand of those were public patients, at a cost of 40 million euro to the state.

The figures published in today's Irish Examiner are based on analysis of the top five most frequently prescribed anti anxiety drugs under the General Medical Services scheme.

10 per cent of people in Limerick have been prescribed the pills - the highest number in Ireland.

South Dublin had the lowest number - at four per cent of the population. This has led to speculation that the number of people with medical cards has an influence on the figures, with 47% of people in Limerick holding medical cards, compared to 20% in Dublin South.

However, that theory falls down in this county. The paper notes that in Donegal, 56% of the population have medical cards, the highest percentage in the country, but where the percentage of the total population prescribed these drugs is lower than Limerick, at 7.3%.

The report also finds that in Donegal, 13% of patients on medical cards are prescribed such drugs, compared to 20% in most areas.