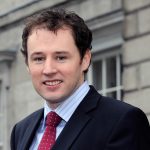 A Donegal TD is urging the government to facilitate the passage of a Fianna Fail bill calling for the establishment of a cross-border, multi-agency taskforce to tackle illegal fuel.

Deputy Charlie Mc Conalogue says the bill, which has been moved by former minister Brendan Smith, has the potential to seriously curtail fuel smuggling north and south of the border.

He says this criminal activity results in losses of around €260m every year to the Irish exchequer, impacts on the environment, damages cars and strengthens dissident gangs.

Deputy Mc Conalogue says the government should facilitate the swift passage of this bill...........