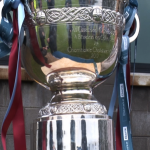 The decider is an all-Donegal affair with Colaiste na Carraige up against St. Columba's Comprehensive School