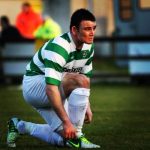 Finn Harps Garbhan Friel has been named among the shortlist for the FAI Intermediate Player of the Year Award.

The 2014 Ulster Senior League Player of the Year had one of his best seasons with Cockhill Celtic helping them to a League and Cup double.

After that success Friel moved to League of Ireland football joining Finn Harps.

Danny Long of Avondale and St Patricks’s Thomas Dunne are the other nominees.

The striker is hoping to follow his former Cockhill team-mate Malachy McDermott in being named Intermediate Player of the Year.