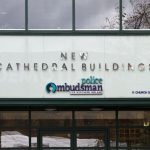 It's reported that police in Derry have used a Taser to restrain a man at residential premises in the Spencer Road area of the city.

BBC Radio Foyle is reporting that the incident happened in the early hours of this morning.

A 30-year-old man has been arrested and is currently in police custody. The Police Ombudsman of Northern Ireland has been informed.