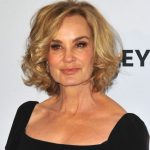 Jessica Lange has confirmed she is leaving American Horror Story after four series.

Jessica, 65, has starred in all four seasons of the gory series – Murder House, Asylum Coven and the most recent Freak Show.

But she revealed at PaleyFest in Los Angeles: “I’m done. We’ve had a great run here. I absolutely love doing these four characters, and in all madness, I love the writers and Ryan and the insanity of shooting it.”
Finn Wittrock, Evan Peters and Sarah Paulson are all expected to be back for the new series, along with Lady Gaga and Matt, who made a cameo in Freak Show.

Matt refused to reveal anything about his character in the new series, and when asked if Lady Gaga will appear as his onscreen love interest, he said: “I can’t confirm nor deny that there will be a romantic relationship.”

Glee star Cheyenne Jackson is also joining the cast, but again kept tight-lipped about his role.

Evan, Sarah and Finn revealed the cast were always kept in the dark about the the upcoming season.