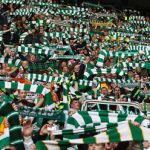 Celtic are still on course for a domestic treble.

They won the Scottish League Cup after beating 10-man Dundee United 2-nil in the final at Hampden.

Kris Commons and James Forrest got the goals, one in either half.