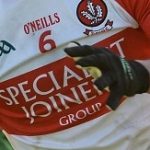 Derry face Monaghan in Division One of the National Football League on Sunday at Clones.

Derry are at the bottom of the table, and with three games left, face relegation from the first Division.

Former Derry inter county player Danny Quinn gave his predictions for the game, as well as casting an eye on the Club Championship final between Slaughtneil of Derry and Corofin of Galway.

He spoke to Tom Comack on Highland Saturday Sport.