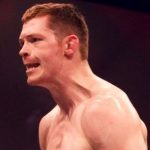 Donegal's Joseph Duffy will make his debut in the Ultimate Fighting Championship this Saturday night in Dallas Texas.

The Burtonport man will enter the octagon to take on American Jake Lindsey, a fighter who has lost his first two contests in the UFC.

Duffy enters the UFC with just one lose in MMA and was also undefeated as a professional boxer.

Conor McGregor and Norman Parke have been leading the Irish charge in the UFC but Duffy was the last man to beat both of them before they got there.

He submitted Parke in the first round of their bout in March 2010, and did the same when he clashed with McGregor later that

In the build up to the fight Joseph has been training with some of the best fighters and coaches at the Tristar Gym in Montreal, Canada.

In January of this year, the 27 year signed a multi fight deal with the UFC promotion.