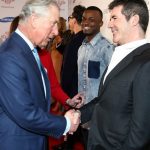 X Factor supremo Simon Cowell has told the Prince of Wales that meeting young people helped by the Prince’s Trust charity made him “proud to be British”.

Simon echoed the words of veteran rock star Rod Stewart and his wife Penny Lancaster-Stewart as they praised the achievements of disadvantaged young people helped by the charity at a star-studded ceremony in London’s Leicester Square.

The singer and TV star were joined by famous faces including actor Kevin Spacey, former Arsenal footballer Thierry Henry and Strictly Come Dancing judge Darcey Bussell for the Prince’s Trust & Samsung Celebrate Success Awards, which pay tribute to youngsters who have coped with issues such as drug addiction, abuse and homelessness.
Speaking before the ceremony at the Odeon cinema, Simon said Charles’s work with the charity was “fantastic”. He said: “I admire what they are doing and I think they do a great job. It is great for the country and great for the kids.”

Simon also gave his support to suspended BBC presenter Jeremy Clarkson, saying the British public appeared to be backing him, but he would not be drawn on what his fate should be.

He said: “I like Jeremy. He has said some stupid things and he knows that, but he’s apologised. I think what is quite obvious is the public are behind him. But that’s Jeremy.”
Introducing the awards, hosts Ant and Dec joked about borrowing the stairs for the ceremony from Britain’s Got Talent, thanking his highness “Simon Cowell”.

And in a reference to Madonna’s tumble at the Brit Awards, they said they hoped the ceremony would pass incident-free as the Prince had left his “Armani cape” at home.
The awards, held in front of a 1,600-strong audience, were given to young people in seven categories.

Educational achiever of the year was Greig Watson, from Scotland; the breakthrough award went to Natalie Coffey, from Northern Ireland; the community impact award was won by Hemel Hempstead team three; Kerry Harkins, from the West Midlands, won the enterprise award; Michael Tyler won the flying start award; and Emma Reilly was named young ambassador of the year.
The 18-year-old overcame a violent childhood that saw him put into care at seven and feeling unable connect with anyone to gain a job at Marks & Spencer after taking part in a Prince’s Trust employability programme, running a customer services department.

Speaking after receiving his award, Joel said: “When so many doors were closed, the Prince’s Trust gave me an opportunity to show what I can do. I am going to follow every single dream I have.”

The main award, the young achiever of the year, was won by Joel Fields, from Birmingham.