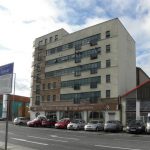 Parts of Queen's Quay and Lower Clarendon Street in Derry remain closed to traffic this morning following a fire yesterday which gutted the Mandarin Palace and Karma restaurant.

Queen's Quay is closed from Harbour Square roundabout to Queen's Quay roundabout, with motorists advised to avoid the area if possible. Diversions are in place.

The fire was brought under control last evening, with the fire service praised for preventing the blaze from spreading to nearby buildings. The restaurant premises itself has been extensively damaged.