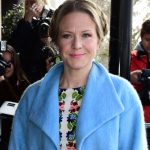 EastEnders star Kellie Bright has admitted the personal letters she has received from rape victims have been hard to read.

The actress plays Linda Carter, who was raped by her partner Mick’s half-brother Dean Wicks (Matt Di Angelo) and is now pregnant and doesn’t know who the father is.

Kellie said: “I’ve had some very personal letters written to me – it’s interesting people feel they can open up to you in a way that perhaps they wouldn’t to other people, because you’re not really connected to them and yet they feel like they have something in common with you.
“That’s been quite difficult times, but also I feel very humbled by it.

“We’ve been working with Rape Crisis, who helped us the whole way through the story, and I feel really proud of EastEnders because I think they’ve handled it in a really truthful and respectful way.”

She added: “It’s been hard work, but very rewarding.”

Kellie also revealed she is very excited about co-star Danny Dyer’s engagement. She said of Danny’s wedding: “He came to mine last year, so it’s only right I should go to his.”