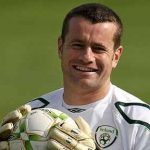 Aston Villa keeper Shay Given and 25 year old Bournemouth midfielder Harry Arter are among those named in a 35 man Ireland squad for their Euro 2016 qualifier against Poland at the Aviva on March 29th.

Given, who recently came out of international retirement, is one of five goalkeepers named

The squad will be reduced before they gather on March 22nd.