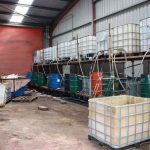 Fianna Fail is proposing the establishment of a cross border, multi-agency taskforce to tackle fuel smuggling.

It would involve all statutory organisations responsible for detecting and policing the illicit fuel trade north and south of the border.

The environmental consequences of fuel laundering have been widely reported in areas along the border.

Former Minister Brendan Smith moved the bill earlier today, saying that the material produced as a consequence of removing green dye from diesel is highly toxic - and has the potential to damage drinking supplies and cause other environmental problems.